Firstly, we were really delighted to see so many people at our screening of ‘A Very Long Engagement‘ (Un Long Dimanche de Fiancialles) at Eastbourne Redoubt in April. Thank you to all of you who came along and enjoyed a really lively event with us! 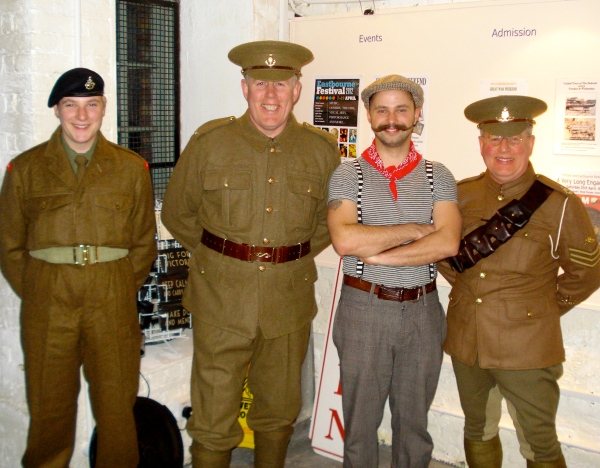 We are very excited to be revisiting Eastbourne Redoubt this coming Saturday evening (12th May), to contribute to their upcoming After Dark at The Redoubt event.

Filmspot will be screening a selection of charming short silhouette fairytales by pioneering animator, Lotte Reiniger – and there will be the chance to try your hand at shadow puppetry with the Filmspot team.

Films on view will be ‘The Magic Horse’, ‘The Ant and the Grasshopper‘ and ‘Cinderella’ [all 1954] – wonderful fantastical stories, just right for bedtime! As well as the Filmspot activities, there will be atmospheric torchlight tours of the museum and free astronomy on the gun platform. It promises to be an evening to remember!

So, in keeping with the theme of bedtime stories, we thought we’d come up with a few other suggestions for fairytale films!

This German feature-length film for children was originally shown in the UK when it was serialised by the BBC in the 19560s. It has a real cult following, and it’s easy to see why. It features many of the elements that gained some of the fantasy films of the 80s, such as Labyrinth or  Legend, their cults: colourful characters, surreal scenarios and wonderous fantasy landscapes.

Jean Cocteau‘s fantastical rendering of this classic fairytale is one of his finest films. Although in places the film does look a little creaky because of its age, if you can suspend your disbelief, it does conjure up a childish sense of wonder in the viewer. The haunting soundtrack and beautifully surreal visual tricks create a fantasy atmosphere.

The first feature cel animation, ‘Snow White’ was not only a milestone in animation, it was the inspiration behind thousands of other beloved childhood films, such as ‘The Wizard of Oz’. It went on to be an unprecedented success, much to the surprise of a skeptical film industry, with many Hollywood insiders labelling the project ‘Disney’s Folly’ while it was in development.

In our opinion, this is the funniest combination of comedy and fairy tale committed to film. You can forget your oh-so-‘witty’ Matrix-style princesses and faux-Scots ogres – this screen adaptation of William Goldman’s book is, quite rightly, a cult classic. It contains sword fighting! giants! a very short Sicilian! rodents of unusual size! heroes being brought back from the dead! priests with speech impediments! Peter Falk! …and that’s just for starters.

A musical? With Danny Kaye? As Hans Christian Andersen? Well, that had to make it onto the list! This delightful film reminds us of sleepy bank holidays, as only a big Hollywood musical can. All the well known HCA fairytales are here, in sung form. The ‘Ugly Duckling’ is a particularly catchy little ditty.

We look forward to seeing you this Saturday!

As a warm up for our forthcoming screening at the CMP Festival of ‘The Prince and the Showgirl’ (ticket details at the end of the post!), I thought I’d share a few Royalty themed films (for those of you not already exhausted by all things regal, following certain big national occasions earlier this Spring that shall not be mentioned!).

Yes, yes, I know I missed off the King’s Speech… any of your favourites I’ve missed off, just let us know!

So rather than ‘The King’s Speech’, I give you another much-lauded British film. Adapted for the screen by Alan Bennett from his own play, and starring Nigel Hawthorne who is at his finest as the ailing monarch. There are some wonderful strong performances, and fast paced, witty dialogue. Bennett took a wonderful play and turned it into a different, more focused animal for the screen.

Macbeth, in feudal Japan – in the style of a Japanese noh play – by one of Japan’s greatest directors. Many Shakespeare adaptations could/ should have made it into this list, but this, although certainly not the most accurate, is certainly one of the most engaging. Visually stunning, and featuring Kurosawa’s favourite lead, Toshiro Mifune, it oozes atmosphere and menace. The sparse, simple settings suggest stage sets, and the ominous fog outside build on the sense of claustrophobia that pervades the film. A true screen adaptation, which doesn’t aim to merely put the play onto the screen, it is a re-imagining, taking Macbeth as its starting point, and fully exploring its themes.

Of course Disney had to feature in this list, after all, what about all those Disney Princesses? I haven’t chosen a Disney princess this time, though – I’m going for the cowardly lion, Prince John (voiced by the fantastically campy Peter Ustinov).

This feature is, to me, Disney at their best – it’s a fun, stylish film with a great sound track, and solid animation. Created on a tight budget, the animators reused footage from earlier features in some of the scenes, notably pinching from ‘Snow White and the Seven Dwarves’, ‘The Jungle Book’ and ‘The Aristocats’, so you could almost call it a greatest hits compendium!

Audrey Hepburn’s first American feature, ‘Roman Holiday’ is a delightful romantic comedy, co-starring the ever-charming Gregory Peck. Hepburn plays Princess Anne, from an unknown country, who is on an official tour of Europe. She is overwhelmed by her schedule of official duties, and escapes to experience ‘real’ Rome, where she meets Joe Bradley, an American journalist. When he discovers her true identity he decides to take her on a whirlwind tour of the city, after promising his editor an exclusive interview.


This would have featured on the list anyway, but is here in honour of the great Peter Falk, who sadly passed away last week.

‘The Princess Bride’ needs no introduction – it has a huge cult fan-base, who can undoubtedly quote huge portions of the film word for word. Based on William Goldman’s 1973 novel of the same name and directed by Rob Reiner (of ‘Spinal Tap’), it is a fairy story with a quirky and biting sense of humour. Although very of its time, the witty script lifts it, and it feels much fresher than the tongue in cheek fairy tales which have become in vogue since ‘Shrek’. Go and watch it now, and don’t forget to memorise all the quotable lines…

FILMSPOT SCREENING OF ‘The Prince and the Showgirl’ (1957)

Part of the CMP Festival http://www.cmpcaonline.org.uk/category_id__65.aspx