We’re really excited about our screening of Jean Cocteau’s gothic masterpiece, ‘La Belle et La Bete’ this evening (Saturday 25 October) at St Michael’s Hall, Brighton. Full details follow at the end of this blog – there are very limited tickets available for this screening, so get in quick!!

In honour of this, we’ve concocted a list of five rather alternative fairy tale films! So here goes…

This film is certainly not for everyone (particularly not for anybody planning to have children in the near future!), but Czech auteur Jan Svankmajer created a dark masterpiece which is in turns brutal, tragic and absurdly funny. It is based on the story Otesanek by Czech writer, poet and historian K.J. Erben, about a childless couple who bring a baby-shaped tree stump to life with horrifying consequences.

Terry Gilliam’s dream-like Tideland plays out like a quirky, morbid update of Alice in Wonderland. Based on a book by Mitch Cullen, the story centres around Jeliza-Rose a girl who is left abandoned when her rockstar father dies of an overdose. She descends into a world of her own imagination, accompanied by her dolls (which are really just the heads of a selection of Barbie dolls) and her neighbours, Dickens, a mentally handicapped young man, and his rather eccentric sister, Dell.

Here’s a nice piece of retro-kitch for you! This colourful German children’s film was originally serialised in the UK on the BBC in the mid-60s. It really is the archetypical fairy story, but with the madness turned up several notches. It follows the fate of a beautiful but haughty princess, who says she will only marry a prince if he brings her the fabled ‘singing ringing tree’ – along the way, the prince comes a cropper to an evil dwarf, who turns him into a bear!

French animator/ director Michel Ocelot’s enchanting ‘Kirikou’ films are a refreshing antidote to  the rather heartless manufactured films that seem to be churned out one after another for children these days. Based on elements of folk tales from West Africa, it entries on an extraordinary newborn boy called Kirikou who saves his village front he evil clutches of Karaba the Sorceress. Although an enormous success in France, his work has not had as much exposure here in the UK – partly because of TV networks being reluctant to show a ‘family’ film which features realistic nudity. It’s a shame, because the film is delightfully upbeat, colourful and unpatronising.

To end on something both relevant for our fairy tales theme, and also Hallowe’en, coming up at the end of next week. The title of this translates as ‘ghost stories’, and is a series of four short films based on the Japanese folk tales collected together by Lafcadio Hearn. Directed by Mitsaki Kobayashi, the films have many fairy tale elements, for example, the etherial appearance of Yuki-Onna (a ghostly apparition who resides in snowy landscapes). This hauntingly beautiful compendium of folk tales is definitely one to watch if you haven’t already!

Hopefully you are now feeling inspired for some fantastical cinema, so why not join us for our special screening of Jean Cocteau’s La Belle et La Bete tonight (25 October) at St Michael’s Hall, Brighton? There are limited tickets left, so it is advisable to book in advance  by emailing info@lja.uk.com – tickets are £5 in advance, and a limited number will be on the door for £6. Doors open at 7pm, for a 7.30pm film. We hope to see you there!

Hello, dear reader! My name is Kathrin and I’m 22 yrs old, and come from Germany. Through my internship here in Brighton I came to know Rachel Hunter, who runs ‘Filmspot’ with her partner Rob Cunningham. It was an honour for me to accompany them to the screening of ‘Das Cabinet des Dr Caligari’ in Eastbourne and to have an insight behind the scenes. Here is a little report about the day I had my first encounter with the ‘touring celebration of cinema’.

“It looks like a doughnut that has sunk into the ground.” Well, actually this is a pretty accurate visual description of the Redoubt Fortress in Eastbourne that hosted the screening of ‘Das Cabinet des Dr Caligari’ on Friday 26 September. I didn’t have any idea of what that fortress would look like, nor had I visited one before. But there is always a first time for everything!
In bright daylight, the fortress looked quite harmless. Imagining it as a sunken doughnut, as Rachel suggested, helped me to overlook the slight spooky atmosphere that lurked behind the closed doors. It is a little bit odd but these plain doors, that faced each other in a round circle, reminded me somehow of ‘Alice in Wonderland’: do you remember the room with the vast number of doors in different sizes and shapes? Basically they have nothing in common, but because there were so many of them in one space I could easily imagine various rooms and places hiding behind them – like in Wonderland. Sorry, moving on from the doors!

‘Our’ room, served as our little cinema for the evening, was the perfect location for the screening of such a thrilling film. The narrow walls and covered windows conveyed the perfect feeling of being trapped – with nowhere to escape. Not a good thing when it’s dark and you are at the mercy of Dr Caligari.
But one step at a time – we were still in the phase of setting up the cinema. While the Filmspotters unloaded their kit, I was entrusted with a single-lens reflex camera to take some photos of the event. Just like that! Oh my God! I felt like I was carrying the crown jewels. I wouldn’t have dared to let it out of my sight or out of my hands. Forgotten was my small pink digital camera which I loved dearly up to that day. It was the first time I held something that precious in my hands and I could somehow understand Rachel’s fear of hanging up the projector – the most important part of their kit. It was a huge joy to spend the whole afternoon practicing and familiarising myself with the camera and taking pictures of everything and everyone around me. It was nice to have an actual task and to feel like a part of the crew. There was always something to do. The main aim was to set up the projector and adjust its height and angle as well as to test the picture on an actual screen. This might sound like no big deal, but it’s quite time consuming when you see the amount of equipment that is essential for these processes. The hours went by faster than I could have imagined.

Not long after us the musicians arrived who were responsible for the live soundtrack during the screening. A big applause for ‘Partial Facsimile’ is in order at this point. Their whole performance was amazing, not only their focus on detail, but also their wonderful costumes. For a start there were Laila (who didn’t dare to catch a breath during the whole day) and Steve, both guitarists. I was amazed by the amount of stuff they brought into that little room. At some point I had real doubts that there was still space for the audience in the end.

It was great fun to test my camera skills now on more than two people (I hope Rachel and Rob didn’t feel harassed by the constant clicking of me pressing the camera button, I swear I would have been). Taking pictures of moving people is harder than I imagined before, but it was definitely great fun catching people off guard and documenting their working process.

Time for the lunch break! Fish and chips are always a good thing to fill your stomach, especially when you had just a small breakfast and are rushing around all day. The break gave us a nice time to sit down and to get to know each other a little bit more. Steve is from Liverpool and composed most of the music as well as playing the guitar. The same applies for Laila. She was so engaged with the set up and preparation for the screening, she would not have a proper lunch. I know that feeling so well. When you are excited and stressed out at the same time, food doesn’t seem like a good idea. After lunch the remaining musicians arrived –Ben and Andy. Ben’s task for the screening was the impersonation of Dr Caligari himself (more about that outstanding performance later), while Andy was responsible for a beautiful bass.

At this point I’d like to stress the kindness of the people at the Redoubt Fortress. They were very friendly and quite excited to see the film themselves. Also, when I visited the Fortress’s museum, I got a very detailed tour of small, specific features the visitor may overlook. They had always a sympathetic ear for us, and were there whenever we needed a hand. Thank you!

After my visit in the museum it was my time to head out to a work-related appointment while the others were getting ready to welcome the audience. To my relief, I made it back in time to take photos of the visitors before the lights went out. The appearance of the room we had prepared in the afternoon completely changed – not only because of the darkness that conquered every corner of the Fortress, but also the vast quantities of equipment had vanished. The musicians wore their theme matching costumes and had covered their faces with white colour – a perfect addition to the whole composition of this wonderful location, the upcoming film and their very own soundtrack. 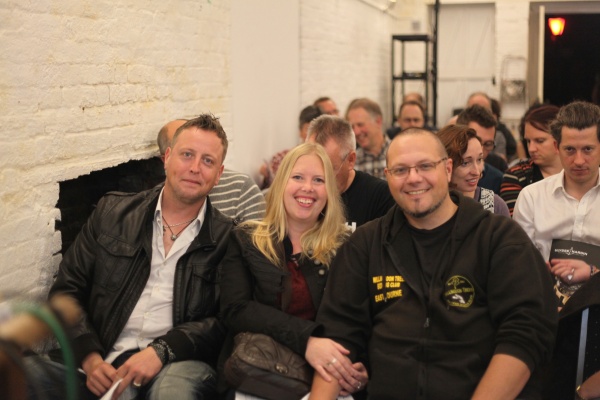 The room was filled with people and I used the remaining minutes to the start of the film to take pictures of the audience and the whole ambience. The Filmspotters did an amazing job of installing subtle lights in forms of candles and background lamps in different colours to create a haunting atmosphere.
I have never seen ‘Das Cabinet des Dr Caligari’ before, so I was quite excited about it as well. While Rachel went to the front and welcomed everyone officially, Rob and the musicians got ready to start the movie and the soundtrack in the exact same moment. Their efforts definitely paid off in the end, because it was essential for the synchronicity of both elements.

I won’t talk much about the actual movie itself because I think everyone should watch it for themselves. As much as I can say is that it was gripping and fascinating at the same time. You don’t need voices to be sucked in that haunting story. You would sit at the edge of your seat, not entirely sure if you are able to stand the intensity of the close-up shots of Dr Caligari combined with the live soundtrack. But not only the soundtrack gave me the chills, it was Ben’s impersonation of Dr Caligari as well. His deep breaths, his laughter – I was genuinely scared of him, I hope he is satisfied. I almost forgot to take pictures at this point!

At the end of the film I just sat there on my chair, dwelling in the post-film atmosphere, before I took some last photos.
One day with Filmspot actually reawakened my longing for watching classical movies again and my interest for touring cinemas. Not only because of the screening itself but also seeing the effort and love behind the scenes, seeing how much everyone have put into this project to make the best of it.
It was so much fun to be part of that team for one day and I would do it again immediately. I hope to be back again, maybe as photographer or just as part of the audience, we’ll see.

But I will be back.